Whenever I’m asked about my study abroad experience (or I’m forcing it into conversation because nostalgia), one of the first questions is,” Where was your favorite place to travel?”

Rome’s suffocating tourism aside, it’s like asking a mom to pick her favorite child. Thus, this question usually prompts my rambling comparisons of Barcelona’s beaches, London’s regality, Germany’s Christmas markets, and see there I go again. Notably absent from the power ranking, though, is Ireland, my actual study abroad destination. No, Ireland didn’t totally drop out of contention (looking at you, Rome). But for me, Ireland exists on a different plane than my weekend getaways. By virtue of tolerating my dad’s war songs and hearing stories about our relatives on “the farm”, I’d always considered myself Irish. But in my four months in Cork, Ireland truly seeped into my identity.

If Madrid and London are the mysterious bad boys boasting guitars and exotic accents, Ireland is the husband who greets you after a long day of work with chocolate and sympathy. Appropriately enough, our relationship was more a steady burn than a passionate speak. Instead of a grad gesture, Ireland revealed its charm to me through the little things.

It’s in the hospitality of its people, offering frazzled American students coffee, directions, and practical tips despite their aversion toward Irish stereotypes. It’s in the pub goers who welcomed us boisterously, asked where we were from, and played Red Hot Chili Peppers upon noticing us. It’s in the carefree joy of the kids inexplicably hanging out in the city centre at 1 PM on a school day, despite wearing matching uniform jumpers and skirts. It’s in Faye, the redheaded 7-year-old who salvaged my awkward homestay through arts, crafts, and a Katy Perry impersonator.

It’s in their seemingly genetic resilience, from living through the potato famine to organizing grassroots rebellions against English rulers and overcoming sectarianism in the North. It’s in its ever evolving nationhood, from British colony to isolated, divided nation to EU player. It’s in its sometimes tense reconciliation of a lily-white, uniformly Catholic tradition with the sexual and racial diversity of its present.

It’s in Cork, the perfect combination of cosmopolitan city and family friendly Irish town. It’s in the fluorescent  snowflakes and Santa Clauses hung across the city centre approximately three seconds after Halloween.  It’s in Patrick’s Street, a winding downtown street where families and friends mill about the lavish department stores and trendy boutiques. It’s in the trad sessions at Oliver Plunkett and Sin E, where strangers cycle seamlessly in and out of common tunes, taking breaks to drink a Bulmers and hit on each other. It’s in the soulful blare of sax emanating through the cobblestone alleys during Cork’s annual Jazz Festival. It’s in that casual 1000 year old cathedral next to my apartment. It’s in the 6 AM runs through Cork’s city centre, watching the rising sun glimmer over the River Lee. 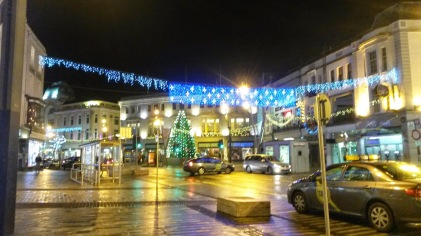 It’s in the West, where mountains preside over rugged, rocky coastal shores. It’s in its kitschy gifts stores a la Francesca’s, particularly the one that named after me. 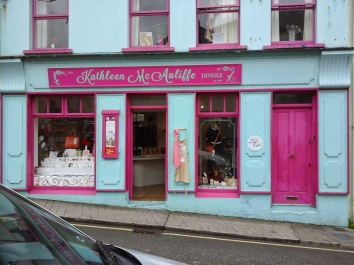 It’s in isolated spots on a map that forced a reevaluation of priorities. It’s in the starry nights in the countryside, where the silence tortures you until it sets you free. It’s in the Cliffs of Moher, where the endless expanse of ocean awakens every latent hope, fear, and desire. 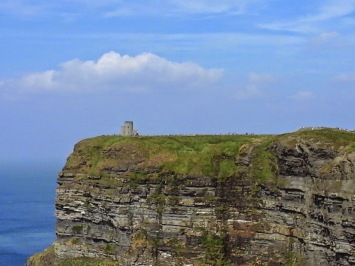 It’s in  the warm feeling that arose in my heart every time I stumbled through Cork’s city centre after a marathon journey from Madrid or London, forecasting a chill day of Gloria Jean’s coffee and Patrick’s Street window shopping, glancing around at my surroundings and thinking,” Finally home.”

View all posts by Kathleen McAuliffe